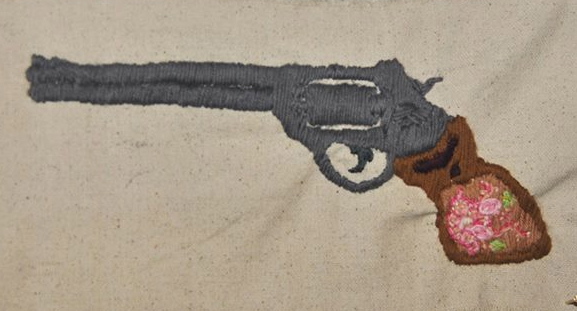 This week, artist Leila Tisdall charms us with her reflections on relocating to Florence from the suburbs of Toronto, her renewed appreciation for craft, and the delight of stepping away from her phone and watching her work evolve, one embroidered stitch at a time. Leila is one of about 20 students from OCAD University studying art history and developing her art practice in a shared studio space. 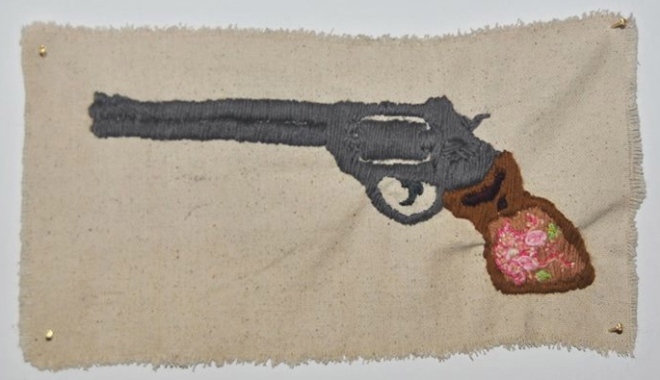 The last six months have been both testing and rewarding.
Even though I lived in London most my life, I’ve spent the last 5 years living just outside Toronto in the suburbs, so you can imagine I’ve had a change of scenery. The language has been difficult for me to grasp, I’ve had a few trips on the cobblestones in front of hoards of tourists, and my neighbours have recently discovered their love for reggaeton music at 7 in the morning. But, the new surroundings have been wonderful too. The city and country are beautiful, and my history classes are weekly site visits to awe-inspiring locations–much more fun than looking at presentations in a lecture hall in Toronto.

The biggest impact for me since moving here, besides the greater intake of pizza and delicious wine, has been to my creative practice. One thing that has really struck me is the amount of crafts people working and selling here. Seeing an artist produce his or her own work through the storefront window is spectacular, and not that common in Canada. Before this, I had been exploring digital art making processes, making art designed for a computer or phone screen. When I arrived here, I was living through my phone, always contacting my friends and family, taking pictures and writing notes.

As my work has developed over the last few months, I have begun to use tangible mediums and pay greater attention to the craft of making an ‘art object’ rather than just an image. I’m doing this by incorporating textiles and embroidery into my work.  While I’m maintaining a focus on painting, I am beginning to integrate some of the sewing practices I have developed since arriving here in September. To be honest, I’m learning as I go along since I’ve never been formally taught (besides making dresses for Barbie dolls as a kid), but even that exploratory act has become a part of the art itself. I have begun a series of embroidered patches on canvas since arriving here.  I enjoy the tactile, intimate, hands-on process of embroidering.  I plan to explore the idea further, whether that be including them in my painting (mainly large, colourful, abstract pieces at the moment), or developing a strong concept behind the patches and letting them stand by themselves, I’m not sure yet.

I’ve found a new focus here.  In art school, you’re kind of in this art bubble where everyone is working and performing together, creating context for each other’s work.  Leaving that Toronto bubble, I am creating a new context for my work, with different modes and aesthetics to discover.  It’s both destabilizing and inspiring.

I don’t think I‘ll ever get used to the chaos or the constant flocks of tourists, I must appear in various people’s iPhoto albums all over the world (my art history teacher says that if you don’t want to walk through someone’s photograph you might as well stay in bed in the morning as you won’t get anywhere), but I am truly inspired by this city.  Canada is only 147yrs old this year, so being somewhere with so much history and unbounded creative potential is igniting.  I now see Italy as my home.

The OCADU students in Florence will be putting on an end of year show in both Florence and Toronto. The Florence show will take place in their studio.  Dates and details to follow.
They are preparing an Othello themed show as part of the The British Institute Library Shakespeare Week for the week of April 7th.
They are also looking for other venues to show their work.

Watch for news about the OCAD Studio Visit on March 28.

For more on Leila and her art, visit leilatisdall.tumblr.com and regazza-nella-luna.tumblr.com, follow her on Instagram @leilatiz, or email her lt11mj@student.ocadu.ca

Support the Arts in Florence

Please help support our new Mobile App and the Creative Community in Florence. Please enter the desired amount in the box below.